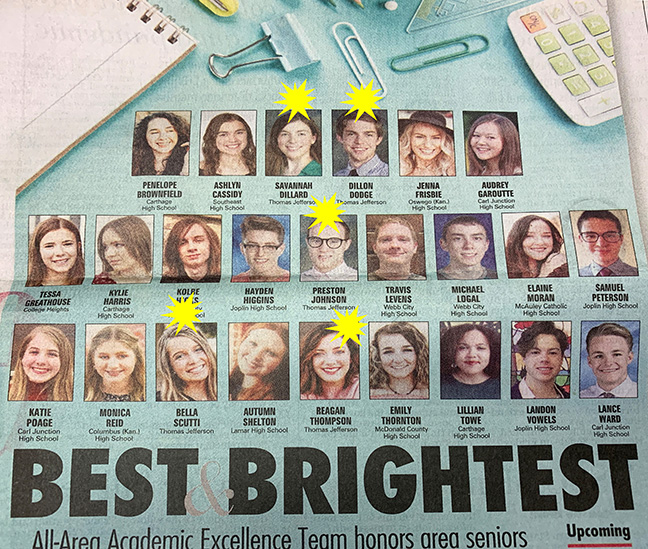 Congratulations to TJ seniors Savannah Dillard, Dillon Dodge, Preston Johnson, Bella Scutti, and Reagan Thompson on being named to the highly-selective All-Area Academic Excellence Team. The students are part of an elite group of high school seniors (only 24 seniors from all area schools were selected, and five are TJ seniors).  Using a formula that considers more than just testing proficiency, students are selected for the All-Area Academic Excellence Team by a score composed of grade-point average and performance on either the ACT or SAT.   Students selected for the team identified teachers who had an outsized impact on their academic careers.  Teachers who inspired theses seniors (named by the students) are Fang Martin, Gelmis Cole, Sam Jack, Paula Bohm, Zina Lewis, and Shannon Bickford, and those teachers received the Distinguished Educator Award.  The All-Area Academic Excellence Team is highly-selective, and students on last year’s team had earned a score of at least 33 on the ACT.  Read the front page article in today’s Joplin Globe, and watch for features on each of the team members on weekday editions of the paper during the next two weeks. Read the front-page Joplin Globe article here.